Hi everyone, CEO Olivia here. Today I’ve sniffed out something wooftastic. Martin Agee, is a violinist who has played for over 40 Broadway cast albums including “Fiddler on the Roof,” “The Color Purple,” & the upcoming revival of “West Side Story.” He is also a volunteer with the ASPCA. When he’s not busy rehearsing or performing, he plays soothing classical music for dogs recovering from abuse.

While training at the ASPCA Animal Recovery Center, Mr. Agee learned about a program where people could read to dogs recovering from abuse, he thought playing music for them could also help.

The response from the dogs has been very positive. Often, within seconds dogs will curl up on their beds or in front of the doors, & quietly listen or watch Mr. Agee play. Some hounds have even helped by singing along. 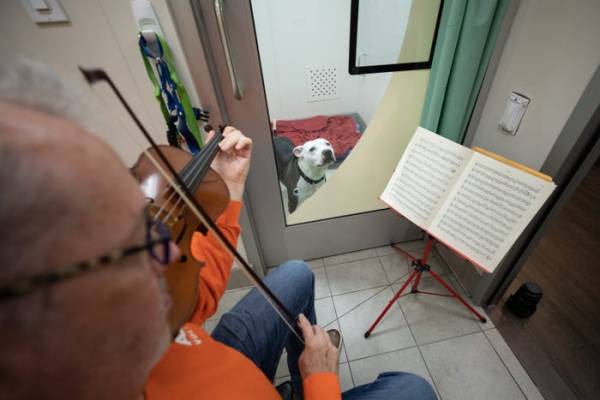 Mr. Agee sticks to soothing classical pieces by Bach, Handel & Mozart. The result is an overall calmness that not only the dogs appreciate but the staff as well. What a pawsome thing to do.

Check out this short video of Mr. Agee at a shelter. We at Knotty Toys for Good Dogs bark out a big “Thank You” to Martin Agee.

Reminder – November is Epilepsy Awareness Month. This year I’m asking all my fellow Epilepsy Warriors & wagnificent supporters to help me raise Canine Epilepsy awareness globally. Here’s what I want you to do. Get your human to take your picture with a sign showing your “Bark Out” or motto against this horrible disease. Then send it to me by messaging my Facebook page, “Oh, the Life of Olivia“.

Once November arrives I will begin posting the pictures I’ve received. Let’s show the world how strong The Canine Epilepsy Community is.

4 thoughts on “Music for Shelter Dogs”