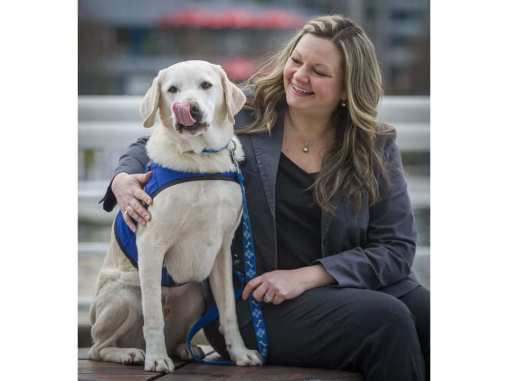 Hello everyone. CEO Olivia here. It’s been two weeks since 58 people were killed in the Las Vegas shooting, an incident that left many traumatized & frightened.

But victims & their loved ones had some respite this week in the form of Caber, a yellow lab from British Columbia, Canada who works as a trauma dog. Caber flew down to Las Vegas to visit people in a family assistance center, & in area hospitals.

Caber & his handler Kim Gramlich were invited to Las Vegas by the Courthouse Dogs Foundation as part of a team. Caber is a very calm, loving dog & helps victims by allowing them to pet & play with him.

While in Las Vegas, he spent time at a center where family members gathered to obtain information about the shooting, & where they helped to identify people who might have been killed. Caber also went to health care facilities where people were all too happy to see him.

Caber has plenty of experience helping people who have been through traumatic events. Seven years ago, his calm demeanor helped him to become Canada’s first trauma dog, working with victims’ services at the Delta Police Department (DPD).

In Fort McMurray, he provided comfort & support to people who lost their homes in the 2016 wildfire. He has also helped witnesses through difficult court testimony.

“I had other responders comment to me on their observations with Caber with victims, and what they were saying was things like, the person wouldn’t talk about how they were feeling until they had a few minutes with Caber,” Gramlich said.

At nine years old, Caber has been doing this work for a long time. But he’s not planning to slow down any time soon. Kim Gramlich says as long as Caber remains in good health & is keen on working, he’ll do so, providing comfort to those who have been through a traumatic event.

What a good dog.

5 thoughts on “Caber the Trauma Dog Goes to Vegas”